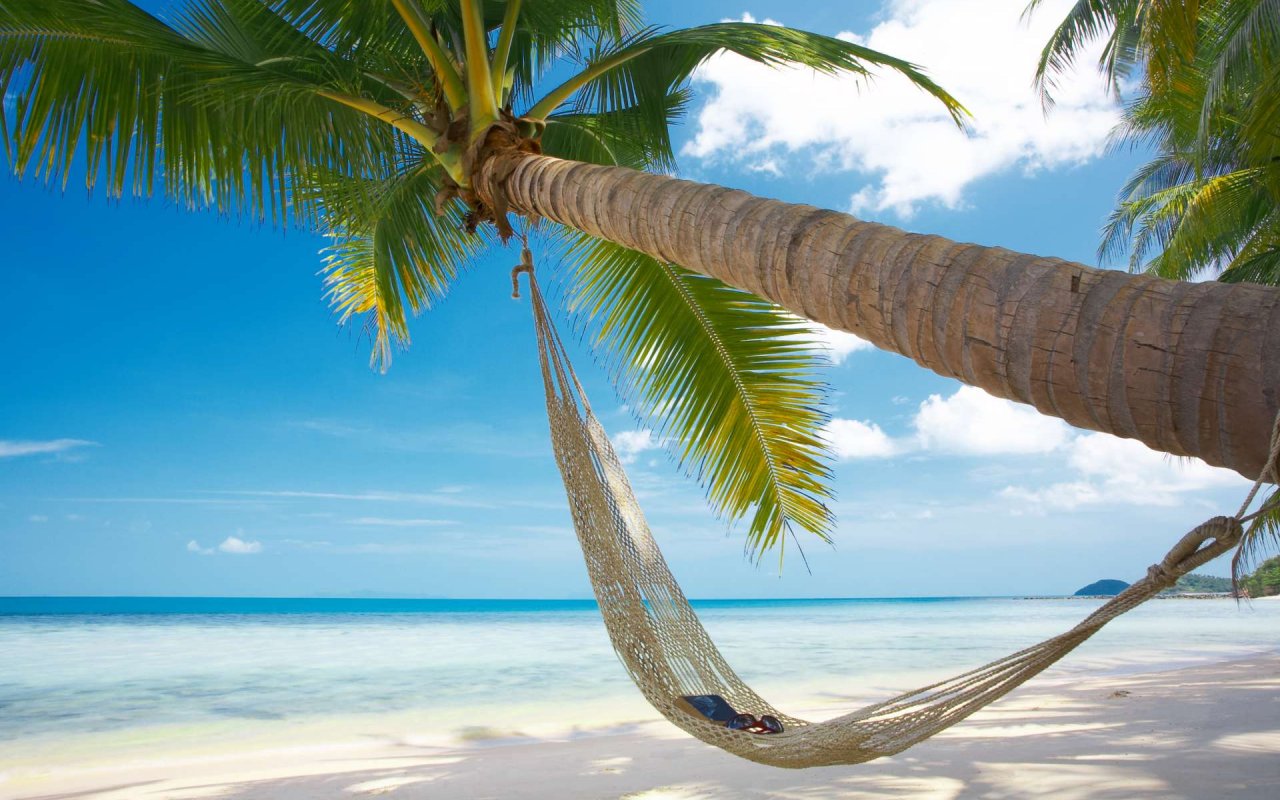 This dream itinerary offers you the chance to explore the riches of the Mayan world and the beautiful country of Mexico. A multifaceted country, you will discover the most fascinating archaeological sites, the charm of colonial cities, the sprawling city of Mexico City and the natural wonders of Mexico. Meet the locals and indigenous peoples for an extraordinary journey in a country steeped in history, culture and tradition. 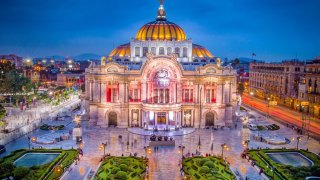 Meet your driver at the airport and transfer to your hotel. Overnight stay at the Metropol hotel. 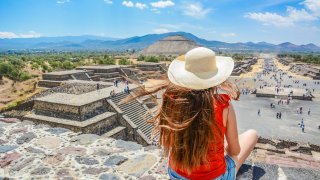 Meet in the hotel lobby and depart for a visit of the surroundings of Mexico City . North of the city, visit the Basilica of Our Lady of Guadalupe , built in the 17th century. It is the most important religious site of Latin America and a major pilgrimage site for Roman Catholics coming from all over the world. You can also see the Old Basilica that is slowly sinking into the ground. The Old Basilica shelters a reproduction of the Black Madonna, which can be seen behind the choir inside the modern basilica.

In the afternoon, return to the center of Mexico City for a tour, starting with the Zocalo , one of the largest squares in the world. There stands the largest Cathedral in the Americas, built on the site of the former grand Aztec temple ‘Teocalli’. Its three naves shelter many chapels and altars adorned with gold, including the beautiful ‘Altar of Forgiveness’. The Palacio Nacional (National Palace) was built on top of the Palace of Moctezuma and features frescos painted by famous Mexican muralist Diego Rivera. Nowadays, it houses the President’s offices. The Templo Mayor (only outside) is a relic of the ancient Aztec capital Tenochtitlan… a pre-Columbian temple in the middle of urban jungle: absolutely amazing!

Suggestions for the evening (contact us for more suggestion)

Suggestions for the Evening (contact us for more information) :

– A Lucha Libre Show (Mexican Wrestling): A very popular sport in Mexico. Visit the great arena of the capital and watch this incredible spectacle – a great atmosphere is guaranteed! (Tuesdays at 7PM, Fridays at 8Pm and Sundays at 5PM).

– Folklore Ballet at the Bellas Artes Palace is one of the best experiences in Mexico City – a whirlwind of color, beauty and music. (Wednesdays and Sundays – 8:30PM)

Overnight stay at the Metropol hotel. 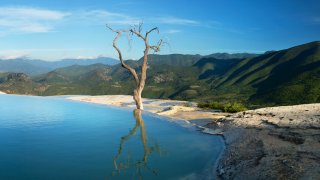 After breakfast, depart for Oaxaca, declared a World Heritage Site by UNESCO, and considered one of Mexico’s most beautiful towns for its colorful facades.

As you travel through the Sierra Madre Orientale mountain range, admire the superb candelabra cacti which can grow up to 8 feet tall. Arrive in Oaxaca in the early afternoon.

Take a walk around the town center, including the Zocalo, the Santo Domingo Cathedral and its museum, Benito Juarez’s house and much more. Nestled in a valley in the middle of the Sierra Madre del Sur, the city of Oaxaca is characterized by its incredible artistic activity, rich and varied handicrafts and its cultural activities. It is also home to major exhibitions and festivals, representative of the cultural richness and diversity, deeply rooted in the traditions and customs. 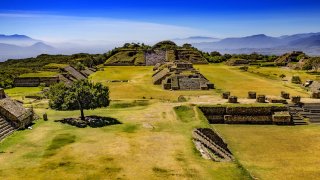 Monte Alban: The Most Beautiful Panoramic View of Oaxaca

In the morning, visit the prestigious Zapotec site of Monte Alban. Once the ruling city of Oaxaca’s central valley, it sits 2000 meters above sea level. Here, you will find remains of palaces, temples, an observatory and a ball court, all with incredible views over valleys and mountains.

Then, head to the village of Teotitlan del Valle where you will meet a weaving family and learn the secrets of natural coloration, weaving and spinning. Weaving here dates back to 500 BC. Whereas they used to work with cotton and ixtle, nowadays the people of the village work with wool to make rugs, jackets, ponchos and dresses.

Head back to Oaxaca at the end of the day. Option included : English speaking local guide in Monte Alban (meet at 9:00AM in front of the main entrance). Option included: Entrance fees to Monte Alban. Public night bus transport from Oaxaca to Tuxtla Gutierrez 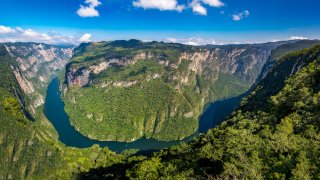 After breakfast, leave for Chiapa de Corzo, one of many Magic Towns in Chiapas, know for its Renaissance structures, warm people and impressive natural wonders. There, you will take a boat and travel through the Canyon del Sumiderom a deep natural canyon on the Rio Chiapas. You will see the ‘Christmas tree falls’, a rock wall eroded by 800 m/2,625 ft high waterfalls. The Canyon is home to a great variety of wildlife including: herons, vultures, spider monkeys and crocodiles…

Note: This is a 2-3 hour shared boat tour, we recommend taking a hat!

If you choose a self-driving option, the boat has to paid for on arrival, it cannot be included in our services.

In the afternoon, arrive in San Cristobal de las Casas, a beautiful city located at the center of an indigenous population area, and is the birthplace of the Zapatist movement, developed under the leadership of Subcomandante Marcos for the protection of the indigenous rights. Every morning, the Tzotzil people sell their wares at the market.

It is truly one of the most romantic Pueblos Magicos in the state of Chiapas. Explore the narrow, cobblestone streets of the traditional neighborhoods and and admire the houses painted in bright colors that are home to quaint shops and markets. Admire the beautiful embroidery and the jewelry made from amber and wood pieces that are on display in the windows and on the shelves of the local shops. Option included: Entrance fees and boat to Canyon de Sumidero. 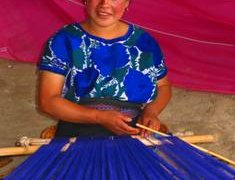 San Cristobal is located in the centre of an area of Indian population where the Zapatista movement led by Subcomandante Marcos for the defence of Indian rights has developed. Every morning, the Tzotz Indians sell their products at the market.

After breakfast, head to the village of San Juan de Chamula where the inhabitants practice a form of syncretism: a mixture of Christian beliefs and ancestral rituals. Then, you can visit Zinacantan where a Tzotzil family invites you into their house and shares with you their customs and traditions (weaving), as well as a glass of pox (corn-based liquor) and handmade tortillas.

Return in the late afternoon to San Cristobal. Option included : Entrance fees to Chamula and Zinacantan. 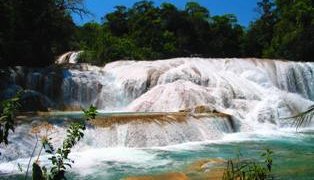 This morning, leave behind the cool and foggy highlands for the warm and humid lowlands. All year long, water comes down from the mountains and eventually creates magnificent waterfalls like Misol Ha or Agua Azul . This is the perfect place to try some grilled fish for lunch. You can sit near the water while enjoying a beautiful view. You will also have plenty of time to go swimming in one of the many pools shaped by the waterfalls. 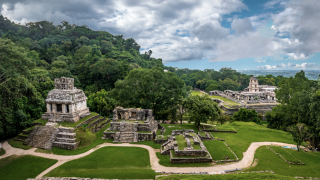 Explore the Maya City of Palenque

In the morning, visit the archaeological site of Palenque . It might well be the most magical site of Mexico. The majesty and mystery of its ceremonial centers still echoes from the past. At the heart of the Inscriptions Temple stands the crypt of King Pakal, discovered in 1952. It still contains the remains of the powerful monarch, covered with jewels and a mortuary mask made of jade mosaic. The surrounding jungle and the buried ruins create an awe-inspiring scenery and it’s easy to imagine the magnificence of the place, back when the temples and the palace stood in their full glory, adorned with richly animated esplanades, columns and ceilings. 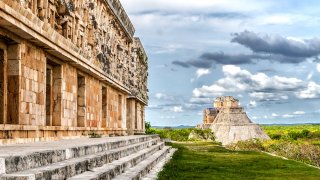 This morning, depart for the village of Becal , where the inhabitants here make their living weaving jipijapas, as the soft, pliable hats are known locally. Spend some time exploring the center of the town and browse the local workshops which display the best of the local panama hats: the typical hat of Yucatan.

Conquer the City of Uxmal

The archaeological site is peaceful and not widely visited by tourists… You will love it! Uxmal , in Mayan language, means “Thrice Built”, but in reality the city was constructed five times. One of the best preserved sites on the peninsula, this massive complex includes The Great Pyramid, House of the Turtles, a vast ballgame court and the Governor’s Palace. The water is really scarce in the region which explains the omnipresence of representations of the rain god Chac-Mool.

The White City of Merida

At the end of the afternoon, arrive in Merida , the capital city of Yucatan. Merida has maintained its captivating colonial charm and strong personality while enjoying great economical growth in recent years. You will find many historical monuments, churches and restaurants with both local and international food. The city is dotted with pleasant little squares which are perfect to relax in, have a drink and listen to a marimba band. 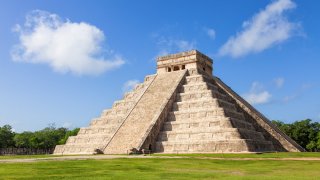 After breakfast, head to Chichen Itza , one the seven wonders of the modern world. Built by the Maya, and then reorganized by the Toltecs, Chichen Itza symbolizes the unification of both religious cultures. The site, which at its height was the most important religious center of the peninsula, is the largest archaeological site in Yucatan.

The Capital of the Maya East – Valladolid

Then, travel to Valladolid , a small and authentic Mexican town that is delightful to wander around. Appreciate the pretty pastel colored houses, while sampling some local foods (we recommend the longaniza, a smoked pork sausage) and having a refreshing ice cream for dessert.

Continue your trip towards the Caribbean Coast with its endless beaches and turquoise waters, home to 2nd largest coral reef in the world. 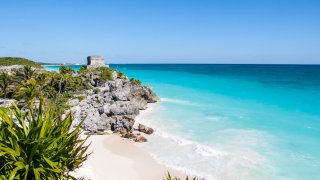 Spend the day in the Magic Town of Tulum, either shopping in the small boutiques, strolling up the central street, relaxing on the white sand, swimming in the crystal clear blue, Caribbean waters or sampling some local seafood. Don’t forget to visit the archaeological site to the north of the main beach. This World Heritage Site sits on a cliff edge facing the Caribbean sea and witnessed the arrival of the first colonists. In 1518, the Spanish conquistador Juan de Grijalva set foot on the beach, under the stunned gace of Batab (the Mayan governor of the time). Visit the remains ancient harbor built in 1200, which disappeared at the end of the sixteenth century.

Note: Transport is not included on this day. Overnight stay at the hotel Don Diego de la Selva. Room with A/C and a king size bed.

Depart from the hotel in private transportation to Cancun Airport and arrive at the terminal at least 3 hours before your flight is scheduled to take-off. 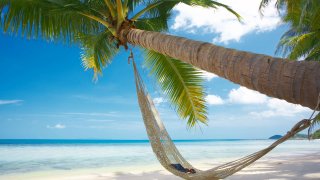 Check out other travel ideas in the theme "Luxury Tours"

The Charms Mexico: Haciendas of the Yucatan